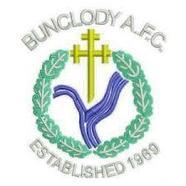 Mens B Team Division 3A

Our B team played Caim utd on Sunday. This was a must win game for Caim in order to stay up and they started the stronger with them scoring almost from tip off when we found ourselves asleep. Saying that Bunclody knew what they needed to do and start knocking the door with Joe Roberts, Paul Nolan, Matthew Skelly and Jack Finn all going close. It was Matthew Skelly who seemed the most dangerous for Bunclody with him constantly annoying the Caim left back and it was on one such occasion that Bunclody found themselves in behind Matthew got clipped and down he went. The resulting penalty was saved, with Paul Nolan failing to tuck it away. Still 1-0 to Caim. A few minutes later though Paul did find a break through and one nill became 1-1 to which it finished at the break.

Second half started and the lads weren't happy with their first half performance. Bunclody kept knocking the door and again found themselves get in behind with young Sean O'Brien getting his first goal for the team. Another penalty this time awarded to Paul Nolan was slotted away by Matthew Skelly. The game finished 3-1 to Bunclody who were much the stronger team in the second half.

The lads play there last game of the year on Sunday at home to Enniscorthy United. The main competition on the day will be between Joe Roberts and Paul Nolan to see who finishes top goal scorer. Paul is currently 1 ahead.