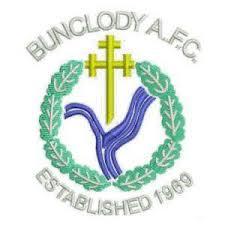 Bunclody started the game very strongly with some very good sharp passing Adam Hogan was marauding down the left wing from left back getting some lovely crosses into the box unfortunately no one in a bunclody shirt could get on the end of them.Bunclody were doing a good job of keeping the ferns danger men in check in the first 20 mins with jamezy Fitzgerald sitting just in front of the back 4 mopping everything up.Bunclody were growing in confidence and finally got the breakthrough when Shane Franklin played a delightful thru ball to the feet of Dion Dunne who calmly took it in his stride and finished into the bottom left hand corner of the net for his 5th goal in 3 matches.It looked like bunclody would go on a and boss the game but the dangerous trio of Ivan Meehan Ryan Nolan and Conor Jordan still looked dangerous on the counter attack it was on one such occasion that Jamie Wilson tracked the runners and won the ball in his own penalty box and in bringing the ball out was deemed to have fouled one of the ferns players.From the resulting freekick ferns curled a beautiful ball round the wall and in off the inside of the post. Bunclody of last year may well off wilted but not this year they settled down and played some lovely football with nothing to show for it till halftime. The break really helped bunclody and they came out firing they really started to turn the screw after bringing on fresh legs in the shape of stevo Ryan bunclody started to increase the pressure Shane Franklin played a cross field pass to Ryan who burst past the full back and along the end line Franklin had continued his run to the edge of the box and was found with a pinpoint pass. He duly took a touch and rifled his shot into the ferns net.Bunclody were well on top at this point and Dion Dunne was unlucky with an exquisite bicycle kick that crashed of the ferns bar.With 10 or so minutes to go cian cowman set of on a run out of defence he played it to dion who bet his man but the cross was blocked the ball came out to the edge of the box where Cian finished to the bottom corner. A victory which Bunclody deserved and sets them up nicely for another local derby vs Tombrack next week to see who tops the group